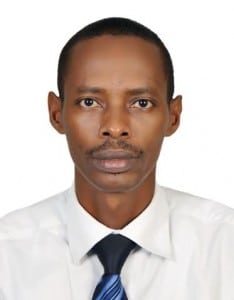 Alexis Havyarimana is a Burundian born in a modest family in the south of the country in the commune of Nyanza-Lac. At age 3, he became disabled due to polio. After his primary and secondary studies, he pursued university studies where he obtained a law degree from License to Hope Africa University in December 2008. He worked as a Lawyer at Burundi Bar Association for six years from 2009 to 2015. On June 2015, he became Chairman and Legal Representative of a large organization of associations of disabled people called Réseau des Associations de Personnes Handicapées du Burundi (Associations of Persons with Disabilities Network of Burundi). He is also Assistant Professor in the department of Law at Hope Africa University in Burundi. Married to a magistrate named Nininahazwe Larissa, he is the father of three children: Guy Stephane Havyarimana (8years), Enock Nathan Havyarimana (3 years) and Joshua Mole Havyarimana (1 year 3 months).