You are here: Home / Write Inside / Poverty, migration and disability in India: from challenges to change

Despite these large numbers, the needs of persons with visual impairment are often overlooked or neglected. They are sidelined and deprived of basic services, and their human rights are violated. Although they have the same health care, educational and livelihood needs as other people, they often face barriers to information and services on account of lack of education and negative attitudes of society and individuals, including service providers.

The situational context referred to above is amply witnessed in the villages of Vangani of Thane District of Maharashtra. Vangani, a village situated in Ambarnath Taluka, lies along the route of the Central line of the Mumbai local train, one and a half hours away by local train from the Chhatrapati Shivaji Terminus (CST), the major railway station of metropolitan Mumbai. It is home to 350 families with visually impaired persons who remain together after migrating from different parts of India during the last fourteen years. In 1998, a politician from a regional political party of Vangani announced a scheme of free homes for blind people. This news was met by a very positive response, and immediately after, more than fifty families with people with visual impairments from different parts of Maharashtra migrated to Vangani in search of free homes. But before this dream scheme could materialise into reality, the politician who announced it was murdered on account of political rivalry. This created a difficult situation for those who migrated as they had no support systems for them and their families in the area to which they had migrated.

This transition involved abandoning one social and mostly stable setting and entering another unstable one due to various push or pull factors. Compelling circumstances like unemployment, lack of skill training institutes, poverty, attitudes of family members and native community members and pressure to enter the market and generate income for the family for those who turned 18, pushed them out of their place of origin. The pull factors which attracted them to this area was the presence of the National Association of For the Blind (India), opportunities for better employment or higher wages, better working conditions and amenities due to the proximity to the metropolitan city of Mumbai.

After finishing their higher secondary or senior secondary education at their native place, people with visual impairment came to Vangani with high aspirations of obtaining a government job relying on the one percent quota as per the policies of the Central Government. Their dreams, though, were soon shattered when they started the process of application for government jobs and during the interviews, where most were told they did not qualify for the post advertised. But they survived and developed their own livelihood system by starting to sell cutlery to travellers passing by the station of Vangani on the local trains. Since then, this blind community has increased in number as people with visual impairment from different parts of India are regularly migrating to this area1.

However, everyday life progressively became an extreme challenge, having to cross the railway tracks, risking their lives because of the absence of a foot over bridge (FOB) at Vangani railway station. This situation forced people with and without disability to cross the railway tracks every day. The non-disabled population somehow managed to cross safely. On the other hand, people with visual impairment were among the most vulnerable groups risking their lives every moment as they crossed the tracks to support their livelihood. Most of those crossing included young couples with small children, themselves risking their lives too. The situation has hardly changed. As one person from the local community expressed:

“…when we leave our homes in the morning, we don’t know whether we will return in the evening or not…”.

Over the years, accidents have been many. People have lost their limbs while crossing while others fell on the railway tracks while moving from one coach to another. Others shared how they saved their life by a scratch and only after others alarmed them of the approaching train while crossing the tracks:

“I was crossing the tracks one day and the train was coming simultaneously. People shouted to alert me and I moved back, and then I was saved…”.

Another person explained how the desperate need to survive meant as they had no other option but to cross those perilous paths:

“We are extremely poor and struggle every day to meet our needs. Even though we are aware of the dangers involved in crossing tracks, we cannot avoid taking this risk”.

Despite the increasing number of causalities, the issue remained unnoticed by the Central Railways authorities and calls to build the bridge in Vangani went unheard. The author (AJ) working on the Community Based Rehabilitation (CBR) project in Vangani, prepared a team with Video Volunteers to spread awareness of the issue. A short documentary called MAALGADI was prepared to highlight the seriousness of the issue and then shared on YouTube and other social media websites. The documentary highlighted the stories of people with visual impairment of Vangani in their own words. Several other non-governmental and governmental organizations2 in the field of disability rehabilitation were approached to extend their support to the campaign. An online petition was filed in November 2012 on Change.org to get a disabled friendly FOB at Vangani station. The petition gathered over 6000 signatures and the campaign used media advocacy to highlight the issue and gain support. After twelve months of consistent advocacy, the Ministry of Railways sanctioned 15 million Indian National Rupees (INR) (US$226,000) in April 2013 to construct the FOB. The construction of the bridge started in 2014 and is set to be completed by the end of 2016 (see Jaiswal & Gupta3, 2016 for details on the process and outcomes of the advocacy campaign). 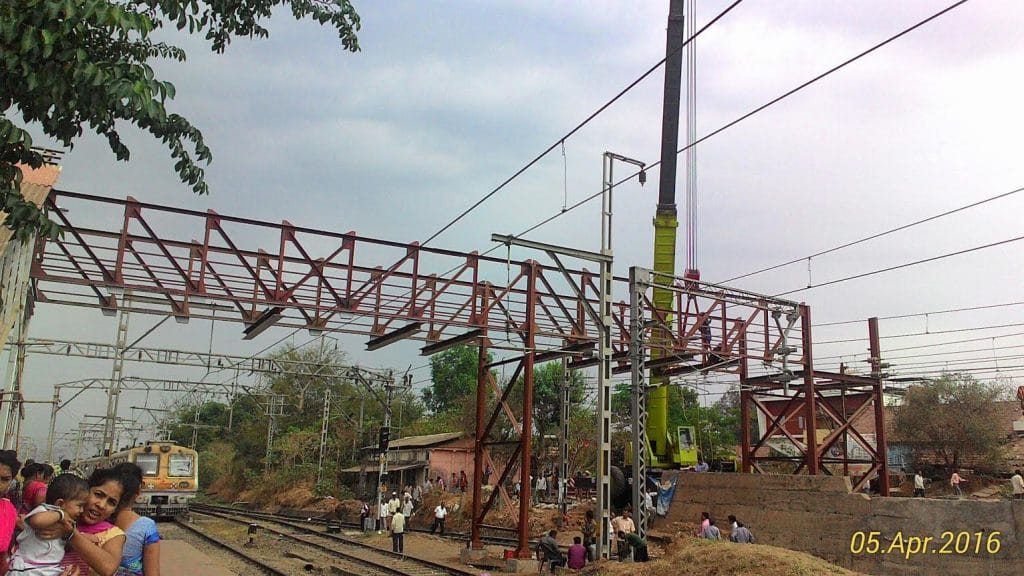 Vangani foot over bridge under construction

The key strength of this campaign was that it was completely owned and driven by the community- people with and without disabilities in Vangani as well as various governmental and non-governmental organizations. This project demonstrated a case where people with disabilities came together, realized the need to take collective action and identified the channels to pursue their goals. Professionals acted as facilitators in this process for advocacy. The project is also testimony to how participatory action, community-driven initiatives, and combined efforts of disabled and non-disabled people can be effective in impulsing change. Till today, the local community continues to follow up on developments with Central Railways to ensure timely construction of the FOB. We found that for the success of collective action, the diverse needs of community need to be acknowledged and timely participatory efforts impemented following the principles of mutual respect, accountability, and empowerment.

The lives of people with visual impairment in Vangani were significantly affected due to the interplay of various factors- migration, disability and poverty. The disabling barriers at various levels in society resulted in their disempowerment. However, their involvement within the process of advocacy helped them and their families realize their potential to resolve the issues affecting them. Systematic and integrated efforts are necessary to create better living conditions for people with disabilities. Believing in them and their capabilities, a practical model of inclusive rural development can be initiated by placing them and their needs at the center of planning rather than excluding them as dependent members of society. In this case, this could be achieved by providing the opportunities and dignified space for them to better their quality of life with their family within their respective society.