Problems with mobility are extensive and serious in Somalia, stemming from the deep and pervasive inaccessibility of the built environment and and basic infrastructure. The NGO has been embarked on a campaign since 2015, demanding that every public building and road be made accessible, whether by installing wheelchair ramps or making sure there are curb cuts. The organisation has ambitious goals of taking the campaign nationally.

Alongside problems with infrastructure, mobility is further compromised by the unaffordability of assistive devices, especially for those living in poverty, and the fact that many of the devices that the poor do own are not adapted to the physical environment. Targeted policy and support by the government remains virtually nonexistent: 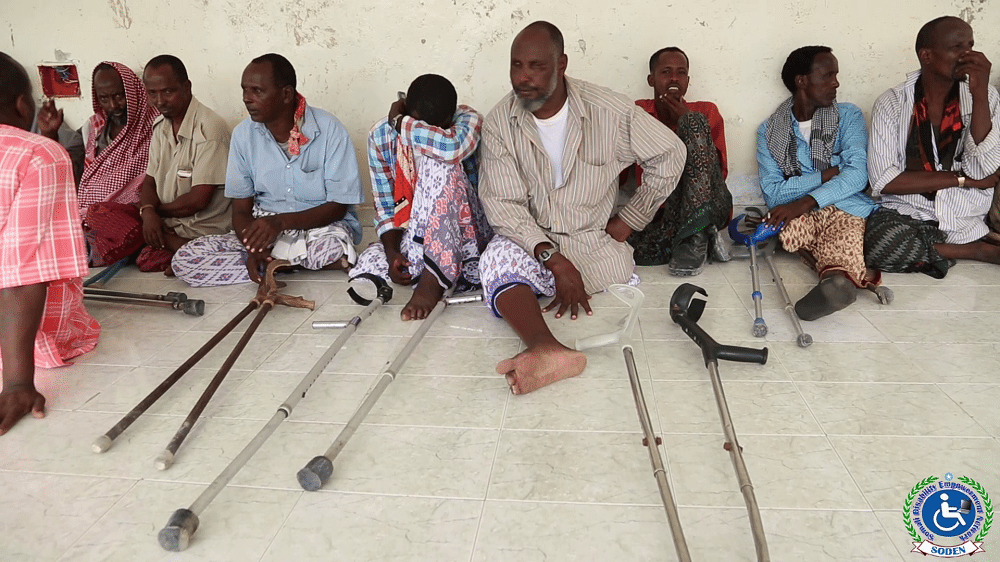 Beneficiaries of the program

Mr. Abdi, one of the beneficiaries expressed his gratitude and joy at receiving a device adapted to his needs and context:

“I thank Fadumo for helping me get these crutches. I had difficulties with the former ones because they were not appropriate ones. Now I am happy to receive these beautiful crutches.”

Another person thanked both SODEN and Mrs. Dayib  for the hel:

“I didn’t have the ability to buy these crutches, but today I have found it from SODEN and my sister Faduma.”

Mr. Farah thanked Mrs. Dayib, advising the beneficiaries to take adequate care of their devices and encouraging them to be and feel part of broader society.

This is not the first time that SODEN has implemented these activities. Mr. Farah stresses that while this help makes a difference to some, there is much more that needs to be done, and many other people who remain  unreached, but this will need both resources and time:

“It will have a huge impact on this specific number, but more needs to be done. Rome was not built in one day. Faduma’s support is a start but it is not sufficient. It may cover some vulnerable people with disabilities who can’t pay the cost of this device, but many more are still to be reached”.