You are here: Home / Africa / Broken bodies: hunting persons with albinism in Tanzania 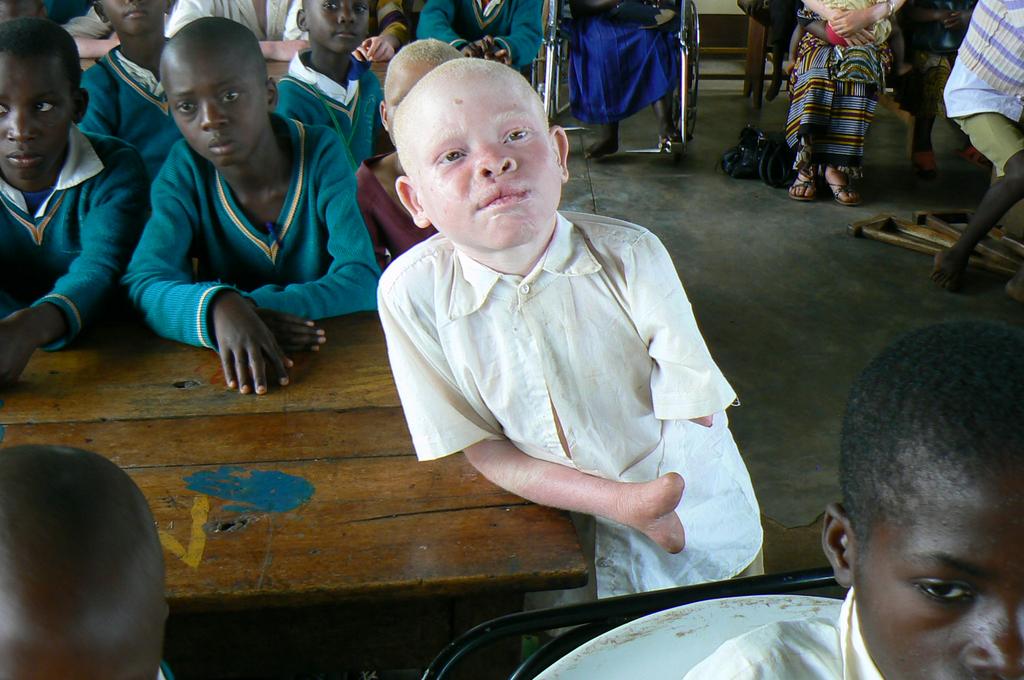 People with albinism are targeted because of their skin colour. They are also singled out because of beliefs about the properties of their body parts. In 2016, the persecution of people with albinism persists, especially in Tanzania where 1 in 1,400 people have albinism (compared to one in 20,000 in other countries). This is probably a conservative estimate because many remain undocumented.

Albinism, a hereditary genetic condition causing an absence of pigmentation in the skin, hair and eyes is the subject of stigma but also superstitious beliefs in the country and parts of East Africa. Many still believe that body parts of people with albinism (PWA) have healing and magical properties, a practice called Muti (pronounced mu:ti).

Witch doctors use their body parts to enhance their rituals and potions. In this case, body parts are often taken from live victims, spurred by the belief that the agonising screams boost the strength of the medicine. Many of the victims of Muti are children.

This practice has fuelled an intense and lucrative treacherous black market locally and across countries for these body parts. As a consequence PWA are hunted down, abducted and violently attacked.

The belief that muti is a source of wealth and prosperity drives much of this demand. In Tanzania these body parts can fetch from $600 right up to $75,000 for an entire body. Over 76 have been murdered and dismembered since 2000 and graves have been dug up.

The organisation Under the Same Sun reports that alongside these killings are 65 survivors, one case of abduction and 18 grave violations, the most recent one reported in October 2015. This violence haunts neighbouring countries, and in a recent (2016) update, UTSS reports a total of 165 killings and 270 attacks in 25 countries.

The report stresses that the numbers of killings and attacks on PWA is most likely much higher. Most continue to go undocumented, and this practice has been going on far longer than one can remember. These mortality figures from Muti are compensated by the larger numbers who continue to die from skin cancer because they lack access to simple and ‘cheap’ preventive measures, such as sunscreen and hats.

Many of those who survive with their mutilated bodies are left without care, living in perpetual fear and isolation, too scared to even leave their homes. Communities too often ostracise PWA believing they bring bad luck. This stigma is partly triggered and compensated by broader discourse and myths including ones that people with albinism are not even human.

Despite national legislation and international condemnation, the practices continue and may be on the rise. There is a surge in particular in East Africa, especially Tanzania where some 93 per cent of the population are estimated to believe in witchcraft. At least 200 people, including witch doctors and their accomplices were arrested in 2015 in Tanzania alone. The United Nations, among others, insists that the government response is not strong enough.

Although legislation is in place, only 11 people have been tried and convicted. This reflects a need for multi-dimensional and more intense measures, including stronger efforts at debunking myths, education and cultural changes. Compensating this problem and compromising investigation is the silence that shrouds the practice, including the identity of the ‘consumers’ of these body parts, and where they are located.

The story of killings and mutilation of PWA has received reasonable international coverage including recent reports by the BBC and Al Jazeera. International measures have followed, including the resolution by the UN Human Rights Council in 2013 to address the attacks against PWA. But the situation remains grim, and many organisations suggest the practice has not only not abated, it may well be on the increase, and its propagation diffuse including among the political classes.

The ones who can afford the high price for these body parts may well not be the poorest of the poor but the wealthy and elite, but these may be untouchable by the rule of law. The increase in attacks prior to and around the recent electoral period in Tanzania are a clear testimony of this, spurring concerns among various organisations about the use of witchcraft including by some politicians.

The result is that it may be hard if not impossible to clamp down on these practices and attacks. In the meantime, many PWA continue to live in fear, even hidden, where danger looms far and deep including within their communities.

Credit: Under the Same Sun