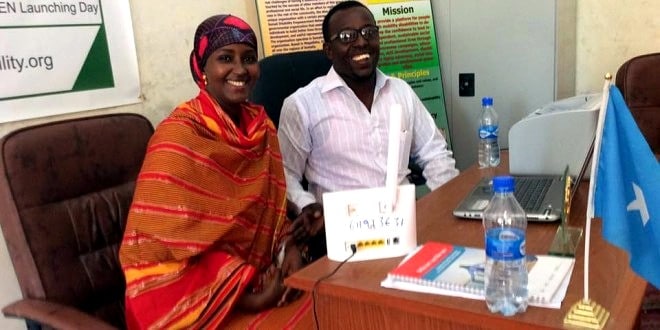 Fadumo Qasim Dayib, Somalia’s first female presidential candidate recently paid a surprise visit to the Somali Disability Empowerment Network (SODEN) in Mogadishu, an organization advocating for the rights of persons with disabilities. Mrs. Dayib, aspiring to become Somalia’s first female president, escaped the country’s civil war in the 1990s as a refugee, relocating in Finland where she started a new life.

Mohamed Ali Farah, Director of SODEN and correspondent for Global Disability Watch met with her to discuss the conditions facing the disabled community in Somalia and to discuss work being done by SODEN. This includes the successful accessibility campaign and the capacity building programs for persons with disabilities. Mr. Farah thanked Mrs. Dayib for her visit, insisting there was an urgent need to focus on and visit those who remain political shadows and voiceless in the country, among them persons with disabilities:

“There is no particular/general attention on the disability sector in Somalia and the biggest barrier is the lack of recognition. Somali persons with disabilities are invisible, and they are holed up in their homes, stigmatized and discriminated by their communities”.

Speaking to GDW, Mr. Farah insisted that much of the situation can be linked to the way governments have approached or failed disability in policy and its implementation:

Mr. Farah commented that having a female candidate for the very first time is more than positive news in a political scenario historically dominated by men:

“Of course, a female candidate is needed because Somalia has been dominated by men for more than half a century. This lady can mean change in Somalia, a country with a recent turbulent political history, followed by fighting by each clan. Fortunately 2012 saw the first non-transitional government. This candidate is the very first woman who has tried to be president of the country”.

Mrs. Dayib commended SODEN’s advocacy work, encouraging the organization to boost their efforts in educating the public about their accessibility campaign. In the meeting, Mrs. Dayib offered her support to the disabled community:

“On a personal level, I will do all I can to help persons with disabilities by providing mobility devices as well as opening schools without intermediaries. I also promise to stand shoulder to shoulder to carry your message to the world and donor countries like Finland. SODEN and other organizations with a noble cause deserve my support.”

Despite the many barriers and the struggles ahead, Mr. Farah remains hopeful:

“Disabled Somalis, a group I form a part of, have long embarked on a journey to fight for our rights with the government and with others. If she is elected in Somalia, there is some hope for disability to have a stronger political focus, because she is a friend to people with disabilities. She promised to be our voice whether she becomes the president or not”.