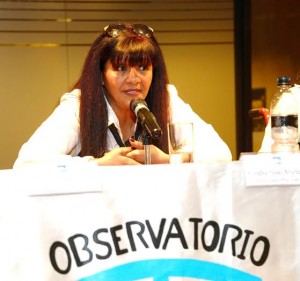 Sandra Beatriz Noe Abelenda is qualified in journalism for social communication sciences and research. She has attended as well as delivered a number of courses, workshops and participated in numerous policy dialogues. Since 2001 she has been engaged as community officer working on poverty issues. She has recently formed part of the observatory for the CRPD in the country, and been a panellist on numerous high profile congresses. She previously worked at PLENADI, formed part of the women’s commission and since 2012 has been the president of the National Disability Federation (Fenadis). She forms part of the Latin American and Caribbean Federation for Human Rights as delegate for Uruguay, is active in the National Institute for Human Rights and People’s Protection, Amnesty International Uruguay and the Iberoamerican Creative Foundation for Development FREE. She has recently been appointed President of the Observatorio Uruguayo de los Derechos de las Personas con Discapacidad (Uruguayan Observatory for the Rights of Persons with Disabilities) which has both national and international scope. Sandra is an active political person.