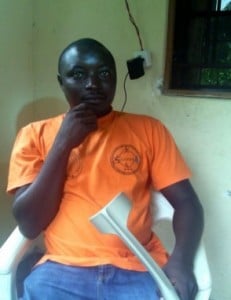 Nsabayezu Eugene was born on 13 December 1979 at the center of the country (Burundi). He became disabled at 4 years after contracting polio. His parents sent him to a rehabilitation center for persons with disabilities in Bujumbura and it is in this center that he grew up and attended primary school. He continued his secondary education in a high school where he was the only person with a disability. It was at this time that he had the idea to found an association for the self-development of people with disabilities following the discrimination and marginalization that he lived himself along with other persons with disabilities in the Burundian community. He attended university in the engineering department that accepted him despite his disability and graduated with a degree in civil engineering and community development. Handicap International supported him with project cycle management training in Saly, Senegal in 2008 and in 2010 on training on advocacy and awareness-raising techniques for disabled people in Brussels, Belgium. Since 2008, he has woorked as the coordinator of the Federation of Associations of Persons with Disabilities of Burundi and is also Legal Representative of one of the associations which is a member of the Federation. He is also a trainer on toolkits in Africa and also of Emmaus International trainer on behalf of the African region. Eugene married a woman with disability and is the father of three boys.