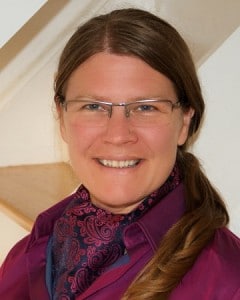 Diane Kingston OBE (formerly Diane Mulligan) is a UK-based disability rights campaigner. She is Deputy Director of the International Advocacy and Alliances department at CBM, an international Christian development organisation committed to improving the quality of life of people with disabilities in poor communities. In 2012 she became the UK elected member of the Expert Committee for the UN Convention on the Rights of Persons with Disabilities (CRPD). Kingston was elected as a Vice-Chairperson of the Expert Committee in March 2015.
Kingston has worked on social justice issues all her life, in particular relating to international development and human rights. She worked at the Institute of Development Studies (IDS) as a research officer before becoming Country Director of VSO Indonesia. The loss of a leg in a road traffic accident in Indonesia led to relocation to the UK and engagement in the national disability arena. Notable achievements in this field have included serving on the Disability Committee of the UK’s Equality and Human Rights Commission (EHRC) and membership of Equality 2025, formerly the UK advisory group to Government for disability equality.

Prior to working for CBM, she was Global Disability Advisor for Sightsavers, where she co-authored policy briefs on the Millennium Development Goals (MDGs) and people with disabilities, and disability and social inclusion. At CBM she was the lead author of the organisation’s position paper on the post-MDG global framework and co-editor of its 2030 development goals publication.

From 2007-2011, Kingston was a member of the World Health Organization’s Advisory Board for Community-based Rehabilitation (CBR), and she was the lead author of that organisation’s CBR guidelines component on education. From 2006-2007, she served on the British Medical Association’s Patient Liaison Group and Equal Opportunities Committee, and had advisory input into two publications: Disability in the Medical Profession (2007) and Disability Equality within Healthcare: the role of healthcare professionals (2007). From 2006-2008 she was a member of the National Institute for Health and Care Excellence’s Guideline Development Group] on Attention Deficit Hyperactivity Disorder.