You are here: Home / Reports / Canada’s dismal treatment of disabled immigrants or ‘how to build a disability-free country’

On April 5th, 2016, a lively community discussion on Canada’s immigration system took place in Toronto, Ontario. Participants from immigrant and disability communities were outraged with Canada’s practice of denying residency to persons with disabilities and members of their families. Many of those present were already acquainted with Canada’s shameful immigration laws and policies that discriminate against people with disabilities, and felt it was high time to organize and campaign against these practices. 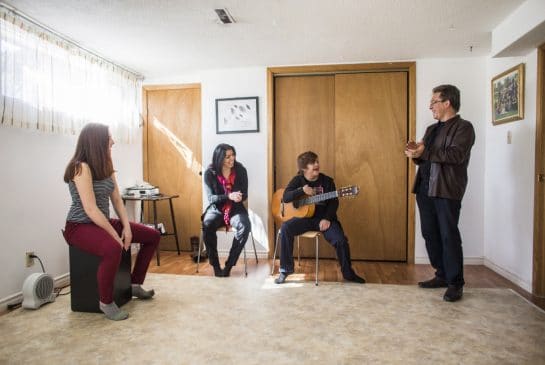 The event was triggered by the recent exclusion of Nico Montoya, a young child from Cost Rica, and his family, who had applied for permanent residency to Canada. Nico’s father, a distinguished professor, had already been offered a job by York University and was working in Canada on visa. However, when immigration authorities realized Nico was a child Down Syndrome, the family was told they could not remain in Canada permanently.

Canadian immigration officials told the Montoyas that Nico was inadmissible because of his disability. If he were allowed to live in Canada, they claimed that Nico would pose an excessive demand on Canada’s health and social services system for potential educational accommodations. They predicted – rather arbitrarily – that the cost of supporting Nico at school might fall between $20,000 and $25,000 per year, which would exceed the average cost (just over $6000 per year) of educating a child who does not have Down Syndrome.

Section 38(1)(c) of the Immigration and Refugee Protection Act (IRPA) states that: “38(1) A foreign national is inadmissible on health grounds if their health condition (c) might reasonably be expected to cause excessive demand on health or social services.”

“I have determined that your family member Nicolas Montoya is a person whose health condition might reasonably be expected to cause excessive demand on social services in Canada. An excessive demand is a demand for which the anticipated costs exceed the average Canadian per capita health and social services costs, which is currently set at $6,387 per year.” –Citizenship and Immigration Canada to Felipe Montoya, 3 March 2016

Not only are evaluations like these discriminatory, but they are very typical in immigration cases involving people with disabilities.

They raise serious concerns because they rely on comparisons between supposedly “normal” and “abnormal” sets of needs, which are often based on out-dated assumptions about people with disabilities and the supports they use. Through these assessment practices, people with disabilities and their needs are stigmatized and deemed to be wasteful, while the needs of non-disabled people are assumed to be legitimate investments by the state. Whatever else it may signify, Nico Montoya’s experience tells us that educational supports or ‘special education’ needs are not considered a worthwhile investment by the Canadian government.

Neither these decisions nor the data they are based on are fair and impartial. We have found that inadmissibility decisions often rely on inaccurate information about the needs and associated costs of disabled individuals. For example, the cost evaluation applied against Nico was wrong and based on false evidence. The Montoya family has shown that the actual costs of educating Nico are much lower than the costs estimated by immigration officials. Immigration officials most likely arrived at their cost estimate by relying on blanket assumptions about people with certain impairments, rather than by treating Nico as an individual and trying to understand his specific support needs.

Many members of the public – both in Canada and Costa Rica – were understandably troubled by the determination that Nico allegedly presents an excessive demand on social services. In an outpouring of support, over one hundred community members from the Toronto area participated in the discussion on April 5th, and thousands more have signed petitions backing up the Montoya family’s efforts to question immigration officials.

During the Toronto event, we heard from other immigrants who are experiencing similar barriers in their attempts to settle in Canada. The number of applicants who can relate to this form of discrimination suggests the disturbing reality that Nico Montoya’s experience is far from unique. In the wake of the event, the Canadian media has exposed further cases of inadmissibility based on disability. These cases, which are briefly reviewed below, form a clear pattern that points to the assumption that persons with disability are burdens to their societies.

Gabriel Bastos, a young boy from Brazil who has cerebral palsy, has few needs that would cost anything to health or social services, yet he was deemed medically inadmissible by Canadian immigration officials due to the stigma attached to disability. His father, a medical practitioner named Jaime Bastos, has argued that he can support any “excessive” costs by paying out of pocket. Nevertheless, Jaime continues to reside in Canada with his wife and two children, but without Gabriel, who remains in Brazil.i

The Bastos’ experience shows how discriminatory immigration practices break up families and infringe on the rights of people with disabilities to have an equal chance to migrate and move around the globe. Something similar happened to 14 year old Jazmine Talosig, who was prevented from joining her mother, Karen Talosig, who came to Canada from the Philippines through the Live-in-Caregiver program. In 2014, Jazmine was deemed inadmissible because she is deaf. Supposedly, the cost of supporting Jazmine’s communication needs would pose an ‘excessive demand’. The ruling ignored the history and status of deaf people as a linguistic minority, and in keeping with regressive, prejudicial views of disability, framed the use of sign language as a social burden.ii

Even though this determination was recently overturned,iii this decision represents a mere exception. The pattern that this case reflects remains unchanged. In a similar story that broke only a few months ago, we were discouraged to learn that Windy Palmiano, a woman from the Philippines who also works in British Columbia under the Live-in-Caregiver program, was told that her daughter Argelline is inadmissible because she is deaf.iv

And if these examples don’t suffice, two more cases that emerged in 2016, both involving the children of Philippine nationals working in Canada under the Live-in-Caregiver program, provide more evidence that individuals are being excluded based on assumptions about their disability. These examples also expose how Canada exploits guest workers from the Global South by placing barriers to their full membership.

Discriminatory practices show no signs of abatement because they are entrenched in the governing legislation, the Immigration and Refugee Protection Act (IRPA).

While some decisions are being reversed, this is often the result of concerted media and public pressure. Just like Jazmine Talosig, Nico Montoya recently learned that he and his family can remain in Canada. Immigration officials still maintain that Nico poses an excessive demand, but they have excused this under “humanitarian and compassionate grounds.” Of course, many applicants are not so lucky, and without the chance of gaining public attention, their rejections are not reversed. Moreover, these exceptions are just that: exceptions. They don’t mark any progress in actually overturning this regressive legislation and undoing its harmful effects.

In the upcoming months, we hope to see Citizenship and Immigration Canada undertake a serious review of current practices and standards in consultation with the new Federal Ministry on Sport and Persons with Disabilities. This disability-specific federal agency is supposed to help harmonize national legislation to ensure that current understandings of disability are respected in different jurisdictions across the country. If and when it happens, such harmonization will help ensure that discriminatory practices are replaced with evidence-based policy.

In addition to the creation of a federal ministry of disability, the Canadian Government has announced plans for a national disability act. All of these actions tell us that the government recognizes the need to end disability discrimination and to set goals to achieve this end. Yes, these are all good ideas, but they are confused ones: persistent discrimination against people with disabilities in immigration law and practice prevents the Canadian government from accepting the most important truth about disability – that it is not a burden.

We need to realize that the current version of the IRPA seeks to build a disability-free Canada. By devaluing disabled people and the supports they use, it also fosters discrimination and creates barriers to accessing the basic opportunities of life – such as fair employment, education, and housing – for those who currently reside in Canada. As long as Canada continues to reject immigrants on the basis of disability alone, we would do well to be sceptical of any positive approaches to disability the government claims to undertake.

*Natalie and Hadayt helped organize a Round-Table discussion on Disability and Immigration on April 5th, 2016, in Toronto, Ontario. Natalie is a member of the Council of Canadians with Disabilities Social Policy committee. Hadayt is a refugee who works as an immigration and human rights lawyer in Toronto.