Contrary to popular Western belief, the Indonesia Islamic education system and its schooling institutions have remained an important counter institution to processes of colonisation, while adopting elements of western education system. Emerging in the late nineteenth century in a form of traditional institution known as Pesantren in Java and Kalimantan, Dayah in Aceh and Surau in West Sumatra, they provided a point of resistance first to local emperors, and then to the colonial Dutch educational system .

Beginning in the 1920s, some of these institutions reformed but also adopted certain western education practices such as the introduction of a grading system and a classroom. Now, the Islamic Educational System is a core stream within Indonesia’s modern state funded education system, offering schooling from Kindergarten through to Higher Education. Unlike the general education system previously funded by the Ministry of National Education, Islamic education institutions have been funded by the Ministry of Religion since the late 1960s. Over time, as part of the national education project, the Islamic Education System started to demand the combination of a secular national curriculum alongside religious education . 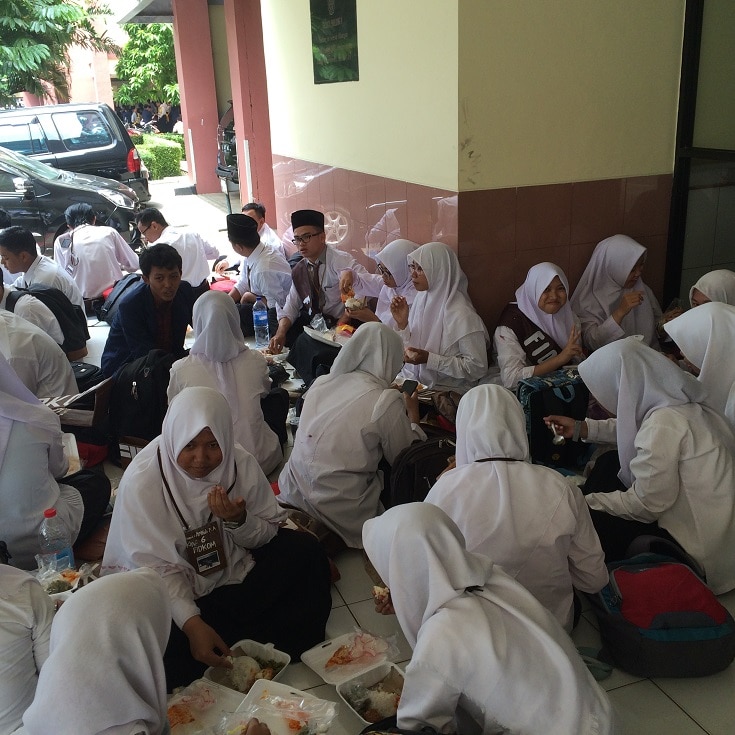 Since the advent of Indonesian democratization in the early 1990s, the Islamic education system has continued to become more popular, particularly with the expanding professional Muslim middle classes seeking a moral direction for their children’s learning and development.2 Whether this is to counter the rise of capitalist consumerism or, a renewed commitment to Islamic teaching, is difficult to assess as there has been little or no research. But there has been a popular argument that the increased number of Islamic schools is a reflection of the growing interests of the Indonesian Middle class for their children to not only learn practical and secular knowledge, but to also be well-equipped with religious values and ethics.3 Data from the Ministry of Religion reports that by 2010 there were about 46,369 madrasah at primary and secondary levels and about 52 nation-wide State Islamic Universities and about 557 private Islamic universities.4

Given the continual growth of Islamic schooling and its educational role in Indonesia, as disability researchers we are particularly interested in understanding how, and under what conditions, inclusion of students with disability occurs in Islamic educational settings.5 Our research was not only framed around western educational practices, such as legislation, curriculum design and delivery, classroom teaching, and the build environment. We were also particularly keen to understand the relationship between practices of disability inclusion and Islamic teachings as taught within these schools.

Our initial findings highlight how inclusion varies across types of Islamic education institutions. Islamic Universities have begun processes of disability inclusion. For example, the Sunan Kalijaga State Islamic University (UIN) in Yogyakarta has been a pioneer in facilitating accessible educational pathways for students with disabilities. In 2007, it established the Center for Disability Services (Pusat Layanan Disabilitias) focusing on providing services and access supports. The university started this initiative by building accessible infrastructure in all its buildings and allocated its own institutional budget to support students with impairments to be actively involved in the learning process. In the academic year of 2014/2015, it is reported that about 45 students with disabilities were enrolled at UIN Yogyakarta, making it the most accessible and inclusive Islamic university throughout Indonesia.6 In an international conference organized jointly by the Australian Catholic University and the State Islamic University in Yogyakarta in May 2015, the Director of the Centre argued for the need for government support, in this case from The Ministry of Religion. Demands included development of academic staff awareness of inclusive education, promotion of inclusive curriculum design, and appropriate budgetary allocations for building accessible infrastructure.7

Following the path that UIN Yogyakarta has undertaken, a number of attempts have been made to address physical accessibility at the Islamic University in Jakarta with the installation of lifts through numerous faculty buildings. New buildings such as the university library have been built to international access standards. While physical access has started to be introduced, there are a number of core issues that lag behind. First of all, there persists a severe lack of awareness on inclusive curriculum design and delivery among faculty staff. Traditionally, lecturing is ongoing and measures such as adaptive assessment are rarely considered and implemented for students who require such adjustments. Moreover, there are no resources allocated towards vital educational supports that facilitate inclusion of persons with disability such as scribe support, technology assistance, sign interpreters and so forth. The data at UIN Jakarta shows that there are currently 5 students with disabilities enrolled and one lecturer with visual impairment teaching at the Faculty of Islamic Education (Tarbiya).

The schooling system, even though compulsory, faces greater challenges. The first is the issue of physical accessibility. Even though the Indonesian Government ratified the UNCRPD in 2007 and enacted several legislation to guarantee the rights of people with disabilities to education, there have been no action to implement policies, for example, through adapted physical facilities at both Islamic and public schools. Many urban Islamic schools, such as Pesantren, are multi-story buildings on small landmass. These often are up to four stories, but limited funding available means installation of lifts remains scarce. This limits students’ physical mobility from classroom to classroom. Additionally, in places like Jakarta, the Pesantren is under constant land pressure by governments seeking to reclaim potential school land areas for development due to its value (interview with Pesantren leaders, August 2016).

As primary and secondary education is compulsory in Indonesia, disability inclusion is occurring throughout urban Islamic schools. Our findings suggest that this, though, is often limited to children with neurological or cognitive disabilities, rather than those physical disabilities, on account of the inaccessible built environment. Moreover, Islamic teachings in relation to educational values are much broader than the standard secular educational model in Indonesia embedded in liberal individualism. These are determined to shape moral and religious values with the ultimate goal of building students’ character. One of the key teachings within the Pesantren schooling system is the value of commonality of all humanity, and that everyone has a moral obligation to equal access for all students. For example, religious leaders of Pesantren involved in our study, argued that according to Islamic teaching, students who want to learn must be actively supported to do so, and that this includes children with a disability. A second value that guides Pesantren education is that academic intelligence should not be the sole and privileged form of intelligence. Instead, there are other forms of intelligence that should be equally valued and recognized. For example, the religious leader of an urban Pesantren stated that he worked with a number of children with autism as his position as faith teacher required him to support students to explore their capabilities and potentials outside of mainstream academic learning. He went on to explain that all students are offered this as a core component of their learning and students with disabilities are therefore not ‘special’ in receiving this type of support.

Unfortunately, our emerging research suggests that some teacher motivations for such inclusive practices are framed through a reward system, that is, a reward that they will receive for supporting children with disabilities in religious education. Therefore, some of the support provided, whilst effective, is often motivated by religious teachers’ desire to do ‘good deeds’ in benefit of their afterlife. Despite the potential limitations of such belief systems for the long term realization of the right to education for persons with disabilities wishing to attend Islamic educational institutions, the contradictory effects have been greater inclusion and therefore, visibility of persons with disabilities within Islamic education systems. Greater visibility and inclusion has involved placing greater pressure not only upon the educational institutions, but also those government departments responsible for funding these organisations in line with national and international human rights obligations. For example, some of our research has revealed that with increased numbers of students with disabilities in such schools, school leaders, including the Kyai and Principle, are seeking greater training and support for their teachers to enable inclusion across their educational programs: educational, spiritual, physical activity and so forth.

These early observations reveal that Islamic education offer significant potential to promote inclusion. The Indonesian government needs to acknowledge, and build upon, these social and religious modalities as a basic platform to promote inclusive education for all.