You are here: Home / Asia / Disability and rehabilitation barriers in the North-East of India 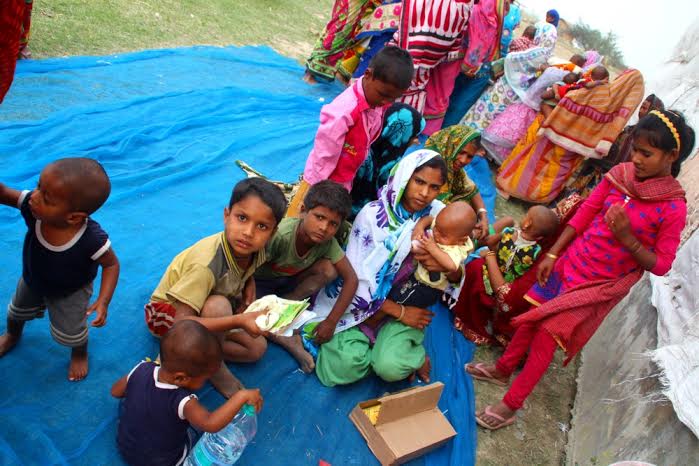 She was a young mother, holding her tiny baby girl close to her.

‘What is the problem with the baby’, I asked.

Without saying a word she lifted the clothes from the baby’s back, showing a red mass protruding from the base of the spine.

‘Four months’ she said and she started crying, silent tears flowing down her cheeks.

‘Have you taken the baby to a hospital?

On that island, there are so many other mothers like her, holding their babies and hoping for someone to help them.

The North East (NE) region of India is home to 44 million persons who live in eight states – Arunachal Pradesh, Assam, Manipur, Meghalaya, Mizoram, Nagaland, Sikkim and Tripura. It is an area of enormous ethnic, cultural, religious and linguistic diversity. In each state there are large number of indigenous groups. Geographically, the region is dominated by dense forests, rivers, lakes and mountains.

The road and rail networks are still very limited, so travelling in the region is a slow and laborious process. Assam is the biggest state occupying more than 70 percent of the total population of the region. Coming from south west China, the mighty Brahmaputra river passes through Assam stretching about 750 kms creating the densely populated eponymous valley, before passing into Bangladesh. Yet, the river has only three bridges in the region. In rest of the state, people wait for hours to cross the river by ferry.

The region is changing. Malls and multiplex are covering the skylines of big cities. There are plans to build a highway that will connect NE of India to Vietnam, passing through Myanmar, Thailand, Cambodia and Laos. Even for persons with disabilities in the NE, things are changing but not as quickly as many of us would wish.

Recently I was in one of the river islands of Brahmaputra, together with a local organisation called C-NES (Centre for North-East Studies). C-NES runs boat clinics to provide basic health services to persons living in the river islands of Assam. Together they provide essential services to more than 3 million persons. I had gone to verify the situation of persons with disabilities on that island which has around 2,500 persons living there.

During my short visit, we identified 36 persons with disabilities who had not received any services. None of them had been seen by a specialist and none of them had a disability certificate. Some of those persons, especially young children and elderly persons, needed operations – for conditions such as cleft lip and cataracts. Many of them needed technical appliances, especially hearing aids. None of the disabled children were going to school.

The situation is likely to be similar in many other river islands. After my visit, C-NES immediately initiated activities to assist the persons we had identified on the island. Last week, five children received hearing aids. Persons from the education programme have promised to ensure the inclusion of disabled children from the island in local schools.

However, not all the problems faced by persons with disabilities in the region are so easy to solve. In the state of Nagaland, the only government referral centre for rehabilitation is closed for the last two years due to lack of funds. The Nagaland State Federation of persons with disabilities is involved in different advocacy activities to convince the state authorities about the importance of the referral centre.

It is not easy to summarize in few words the situation of persons with disabilities in the NE because it is a huge area with an equally large population. Generally speaking small cities and rural areas are worse off when compared to big cities. However, there are some rural areas with good and effective community-based rehabilitation programmes. Some states of the NE like Meghalaya and Tripura have better services compared to others. Yet, so much still needs to be done.

In response to these concerns, I have prepared a working paper on the situation of disability and rehabilitation services in the NE. Like the young mother with the four month old baby in the beginning of this article, I would like to quote the words of three persons from this report that give an idea of the challenges faced by disabled persons in this part of the world:

“Getting pension is not easy. For every certificate, I had to give some money. Then, some big function was organized in the city and we had to go there to get our pensions. It was not easy. There were persons who had a lot of difficulties in moving, so to take them to the city was difficult. A minibus was rented to take us. We had to pay the expenses to go to the city. In the end to get my pension, I had to spend so much money.” Mohan, 46 years old, locomotor disability (with a leg amputation)

“In the school, I could not see the blackboard properly. Other girls used to call me blind. I felt so bad, so I decided that I will not go to school. Then my aunt told my mother that there is a school for disabled children and to send me to this school in Shillong. We did not have money but my aunt said that I will not have to pay for anything. They saved my life. They gave me a place to live and to study. I have achieved success in my life. Now, I look back and think that I only had very low vision! I only needed eyeglasses. But in the village, this disability was going to destroy my whole life, make me remain illiterate and poor. That is not fair. How can we leave the persons in the villages without any help, that they have to suffer so much for disabilities?” Momi, 34 years old, low vision

“He had fever and then he lost his hearing. He is my only son. I took him to Guwahati medical college. I took him to Kolkata. He was admitted in the hospital in Dibrugarh for two months. I did everything I could. We sold off some land, my wife’s gold, even our bicycle. I took a loan of 60,000 Rs. In the end I have accepted defeat. Now he sits alone in room, he does not go out, he cries. What can I do? How will I pay off my debt?” Ahmed, father of a 14-year-old boy with a hearing disability