You are here: Home / Reports / Malawi’s albino hunters and the rising mutilations 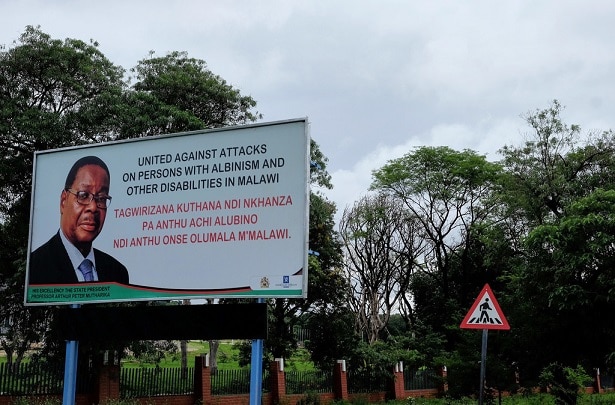 Attacks on persons with albinism are on the rise in Malawi as criminal gangs, so-called “albino hunters” are out on the prowl, seeking, abducting, mutilating and killing PWA for their prized body parts. These body parts, believed to have magical properties have led to a surge in demand and a lucrative underground market. Efforts at clamping down on these attacks (often successfully) in Tanzania, has seen a rise in these gruesome acts in neighbouring Malawi. In Tanzania, a full set of bones of a PWA can fetch up to US$75,000.

PWA are hunted like animals by men armed with machetes, knives and axes. Attacks occur even in broad day light, and some of these happen even with involvement from family, serving as bait to get PWA in the hands of these criminals. The police in the country have recently branded PWA an ‘endangered species’.

Estimates are often imprecise, because many attacks go undocumented and unreported, but conservative figures suggest that in 2015 alone, there were over 30 criminal offenses in the country involving abduction, killing and trafficking of bones. Graves, too, are regularly dug up for these body parts in the hope that they can then be sold on.

The latest reported victim was a nine-year old boy with albinism hailing from Malawi’s eastern district of Machinga. He was abducted on 26th February from his home when his father was away fishing. His mother Edna tried to rescue him from the two attackers and was injured in the process. The severed head of the boy was later found by the police.

The severity and frequency of the cases, a crisis in its own right, prompted Malawi’s Inspector General of Police, Lexen Kachama in April 2015 to order his officers to shoot to kill anyone caught abducting PWA:

“Shoot every criminal who is violent when caught red-handed abducting people with albinism,”

He insisted the police like others cannot sit and watch these atrocities, and required an equally heavy handed response:

“We cannot just watch while our friends with albinism are being killed like animals every day. We do realize that these people are ruthless, have no mercy and therefore they need to be treated just like that.”

Despite the official response, there seem to be few if any improvements as PWA continue to live in fear and isolation. Figures issued by the police (again most likely a severe underestimation) report at least 11 killings of PWA and 34 attacks, including mutilations since January 2016. The blend of poverty, superstitious beliefs and the spins by witch doctors around the properties of these body parts mean these attacks and deaths are likely to continue.

Kachama states that what used to be a Tanzanian problem has now spilled into Malawi. Unfortunately, Tanzania still struggles when it comes to protection, enforcement, and convictions are still very few, which means that an unprepared Malawi may well be set on the same direction. The problem is insidious and needs a multi-dimensional and cross-sectorial strategy and intervention, but this may be as scare as it is problematic. Perpetrators are often community and even family members and these communities are often rural and isolated, making information flow and intervention hard and slow.

Kachama in fact noted that concerted community awareness, support and information were crucial in starting to address the problem:

“We need members of the public to support us. The kidnappers live with us in our communities so if we join hands, we can end these horrible attacks and murders”.

Some communities may well be aware, but the slow and ineffective pace of justice, is forcing some to take the law in their own hands. On Tuesday 1st March, an angry mob in Southern Malawi’s border district of Nsanje lynched and then set on fire seven alleged members of an albino hunter gang found in possession of human bones.