You are here: Home / Africa / Special mothers project: working for children with Cerebral Palsy in Ghana 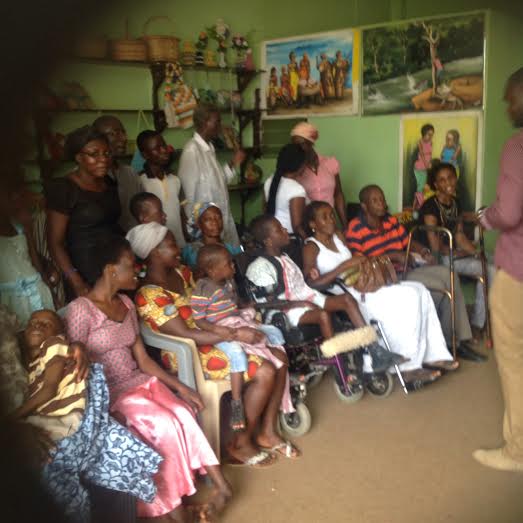 Members of ShareCare Ghana after a meeting. ShareCare is a support group for people with autoimmune diseases.

The Special Mothers Project in Ghana started as a parents support group for mothers with children who have Cerebral Palsy. It was borne out of my own frustrations as a mother, one who wanted to go all out to ensure that her child with CP could live to attain her full potential.

My own frustrations like those of many other mothers stemmed from the fact that very little is known about Cerebral Palsy in Ghana, in fact when you mention CP to even educated people, they either pretend knowing or will ask directly what that is.

Many children with CP are languishing in homes, with no hope of any good future…many parents are even forced to abandon their children.

Many people, some even with a Master’s degree have even asked whether cerebral palsy is the same as autism. In some cases, even people in my news room suggested I take my daughter to the Autism Awareness Centre.

So with time, the Special Mothers project, which started as Project Eyram (this is my daughter’s middle name) became an advocacy and awareness project. We now advocate for appropriate policies for children with cerebral palsy while creating awareness on the condition.

Because of the lack of awareness and policy in that direction, many parents with CP children are forced to keep the children in the house, probably thinking that there is no hope of a better future.

Many mothers have had their CP children refused admission into basic schools, even public basic schools, simply because the child is not walking or talking properly.

Even though the Ghana Education Service has a Special Education Unit and should ideally attach a special educator to every government or public basic school, in practice that is really not working. In some schools, there are special educators who simply go to their attached schools to loiter around and go back home because there is nothing for them to do.

Meanwhile, many children with CP are languishing in homes, with no hope of any good future, and out of sheer despair many parents are even forced to abandon their children.

I have heard stories where parents or mothers are even convinced they should either kill these children or leave them in the forest or by the rivers for them to die. These children are usually referred to as “River Children or children given by the smaller gods”.

The Special mothers’ project is a project that aims to give hope and encouragement to such parents through advocacy and by showing positive examples of people living with cerebral palsy in our society and elsewhere.

The project seeks platforms in crèches, churches, schools and other NGOs to talk about cerebral palsy as we look for ways to enhance our advocacy to ensure some a meaningful life for children living with CP.

The project is also looking for ways to bring professionals such as therapists closer to families with CP children and to train parents especially mothers in basic therapies to enable them do the therapy at home.

Ultimately what the special mothers’ project wants and demands is a policy statement and implementation by the government to help these children. Our aim is not too ambitious or unrealistic. We simply want to avoid seeing more children die or living isolated simply because of their disability.