You are here: Home / Africa / The first Pan-African Albino Conference 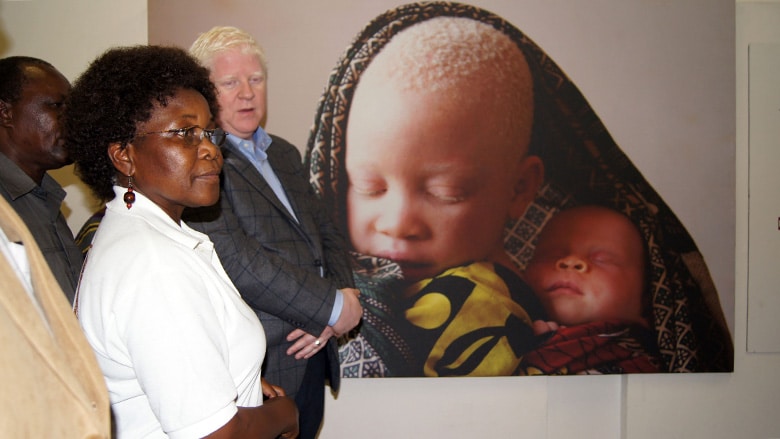 Peter Ash and Vicky Ntetema from the organisation Under the Same Sun viewing the photo exhibition by Jacquelyn Martin.

The very first Pan African Albino Conference recently held in Dar es Salaam from November 19– 22 2015 marked an unprecedented moment in bringing together major stakeholders to discuss and empower advocacy and protection measures for people with albinism.

Hosted by Under the Same Sun (UTSS), an international organisation advocating for the rights and protection of people with albinism, the conference was attended by over 200 delegates including representatives from albinism communities of 29 African nations and 9 non-African nations.

With sessions translated into English, Kiswahili and French, delegates got together to share resources and best practices to work together to fight the discrimination, persistent attacks, and deadly violence on people with albinism in many African countries. Printed on a wide banner in the three languages, the objective of the conference was loud and clear: ‘To make attacks, stigma and discrimination a faint memory’.

Peter Ash, founder and CEO of  UTSS and a person with albinism himself, welcomed all guests addressing the audience as his “brothers and sisters” whose “genes are exactly the same”. He went on to emphasise that despite the hardships, life in Canada, the country he was born and raised in, was hardly comparable to that of others in some African countries; a life marked by persistent rejection, discrimination, stigma and life threatening violence. Mr. Ash stressed the need for a common and concerted fight, calling out to “Let my people go”.

UTSS and others shared relevant and up to date information on albinism, including best practices that delegates could take back to their own countries. Sessions were also held on how to document and report attacks against PWA to the UN, prepare cases to take them to court and effective ways to lobby and engage governments. A panel of victims from Tanzania also recounted their attacks.

A medical clinic set up by the international organisation Standing Voice was available on-site. All conference attendees with albinism received free skin and eye examinations and advanced cases were referred for surgical treatment. The organisation also handed out adaptive low vision devices, including glasses and monoculars free of charge to attendees. All representatives present were asked if they wanted to bring this clinic to their countries, an offer received with a resounding ‘yes’.

An on-site video studio interviewed and documented the testimony and life experience of each attending African with albinism, voices, the organisers insist, should be heard, honoured, preserved and possibly published.

Other notable events included the Presentation of Country Resolutions where each nation in attendance publicly announced 5 resolutions (action plans) emerging from the conference and which they intend to implement in their respective countries.

The Bari-Bari Prize for outstanding albinism advocacy was also presented to Mr. Bonface Massah of Malawi.

The conference concluded with a photo exhibit of pictures taken by photojournalist Jacquelyn Martin on her trip to Tanzania in 2012. The photos provide a narrative of the lives of PWA living in shelters in western Tanzania. These shelters have been set up to offer protection from attacks motivated by superstitious beliefs about the magical properties of the body parts of PWA, sold in a lucrative black market. These attacks continue despite recent policy developments, attacks that frequently go undocumented and unreported especially in rural areas. The full exhibition moved to the National Museum of Tanzania and ran throughout the month of January.