The appointment of Dr. Abdallah Possi as deputy minister in the prime minister’s office marks a positive moment in Tanzania’s long and painful history of persecution of people with albinism 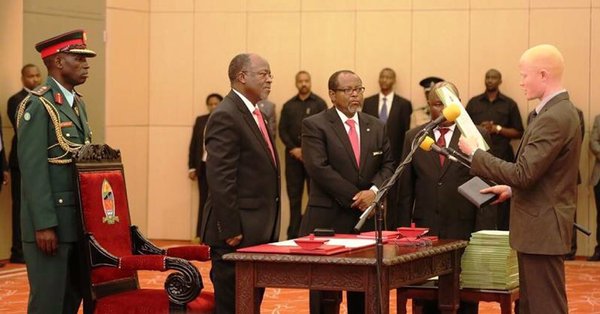 The recently appointed 36 year old Tanzanian lawyer and academic will be responsible for policy coordination, parliamentary affairs, employment and disability.

This appointment, hailed by many as a positive move forward comes in a context where the mutilation, kidnapping, persecution and even killing of people with albinism remain rife, and where measures to protect and provide assistance remain weak or poorly implemented. While laws have been drafted in recent years, convictions remain sparse.

Human beings are never satisfied. The appointment is a great deal and has to be used as a reference to build other movements that could lead to the total inclusion of persons with disabilities in all social, economic, cultural, and political areas

Mr. Nemes Temba, Chairperson of the Tanzania Albinism Society (TAS) commented that while the road ahead remains an arduous one, this appointment has broad implications, not least in sending out a message to the public about the capabilities and contributions of persons with disabilities (PWD), not only in Tanzania but the world over:

“It is a great development and I would like to pass my sincere gratitude to the president for his courageous decision. He has shown the world that persons with a disability can do even more than is expected. He has indeed demonstrated a good example that even other nations need to imitate”.

Mr. Temba hoped that this was the start of more appointments to come, but even more critically, the impetus for changes in perceptions and developments that benefit persons with disabilities at large:

“Human beings are never satisfied. The appointment is a great deal and has to be used as a reference to build other movements that could lead to the total inclusion of persons with disabilities in all social, economic, cultural, and political areas. PWA will be happy to see more presidential appointments making up the government. And the positions are many: Regional Commissioners, Regional Administrative Secretaries, District Commissioners…. Much, though still need to be done in getting rid of the discrimination facing PWDs. There is now a green light to have a great change of the PWDs image in Tanzania”.

Motivated by superstitious beliefs about the magical properties of their body parts, PWA continue to be hunted down, especially those in rural areas, and those who survive are forced to live in isolation fearing for their lives.

The problems are many, deeply embedded and need concerted action. Mr. Temba commented that there is still a long way to go. People need to be educated to combat superstitious beliefs about persons with albinism and their body parts. PWA themselves need support and services. This includes access to education and materials,barred access strongly bound to poverty and location:

“Most of them have been born in poor families and communities that do not value their education. Books with large print, learning aids like lens, binoculars, dome and magnifiers are greatly required”.

These measures, though, need a serious reevaluation of the current state of things, resources and concerted action:

“The government need to review the curriculum to specify the needs of different PWDs and address them accordingly. More advocacy work is needed to inform and educate teachers on specifics for handling persons with varying disabilities”.

Health and housing are two other critical areas that need contemplation and intervention. Mr. Temba punctuated the need to provide resources to prevent and treat skin cancer. including protective clothing , wide brimmed hats, sunscreen lotions, sunglasses and so on. He went on to emphasise that without good health, PWA will never be able to move forward, whether it is in education or securing a livelihood.

Originally a temporary measure, camps were set up some five years ago to protect PWA from the killings and atrocities that had gained momentum. Unfortunately, Mr. Temba commented that these have become permanent unauthorised residences that serve to isolate but also encroach on personal freedom and dignity:

“We sometimes refer to them (camps) as jails, as PWA are not comfortable living there due to the  prevailing challenges”.

Asked whether the government is genuinely ready to address the problems faced by PWA, Mr. Temba stated that positive measures have been taken, including the establishment of the PWDs directorate in the Prime Ministers Office. He remains hopeful, stating that the president’s nomination of  Dr. Possi too shows a level of initiative. However, as Mr. Temba went on to conclude that the government on its own may not be in a  position to address all of the problems by itself, highlighting the need for a collective effort on multiple fronts.